One of the things I like about Linux (aside from it being free), is that you can deploy a website using SSH rather than FTP. This is more secure because SSH uses encryption and a single port. In this post, I will show you how to deploy an ASP.NET Core website using Git and a Post Receive hook.

Wouldn’t it be good if you could publish an ASP.NET Core website to a Linux server from the command line with something like this.

This is how I publish the blog engine that runs this site. Read on to find out how this can be achieved with Ubuntu in 7 simple steps.

Step 1: Download the ASP.NET Core Samples to your Local Machine

First of all make sure you have Git installed on your local machine. Open Git language-Bash (or terminal for UNIX systems) and then run the following command to download the samples.

We will use the HelloMvc sample to demonstrate pushing an ASP.NET Core site to the remote server. We will also configure a post receive hook so that the site will be published to an output directory on the server (/srv/aspnet/hellomvc.com).

Note: We used git as the user and hellomvc as the repository name. We will configure these on the remote server in the following steps.

Step 3: Create a Git user on the remote Linux server

From your local machine, run the following command with Git language-Bash (or terminal on UNIX based systems).

Replace youradminuser with your username and 192.168.1.201 with the IP address of the remote machine.

You should now be connected to your remote server.

Next, create a user called git and assign a password.

Note: Notice we specified the -s /usr/bin/git-shell for the shell. This prevents the Git user from logging onto the system.

Before we move onto the next step, we need to modify the sudoers file so that the git user can run the publish command.
Run the following command:

Add the following line to the file and then save it.

Step 4: Configure the output directory of where the site will run from

Run the following commands to create the output folder.

Step 5: Create a bare Git repository on the Linux server

If Git is not installed on your server, run the following command.

In this step, we will create a script that is run whenever we push any changes to the Git repository. The script will checkout a working copy to the /tmp folder, restore the NuGet packages, build the ASP.NET Core site, and then publish the output to the directory we created in step 4.

Add the following contents to the file.

Note: sudo is required for permission to write to the /srv/aspnet directory.

Change the owner and group of all files inside the git repository to git.

The final step is to publish the local repository to the remote server using the following command:

If everything worked OK you should see an output like this. 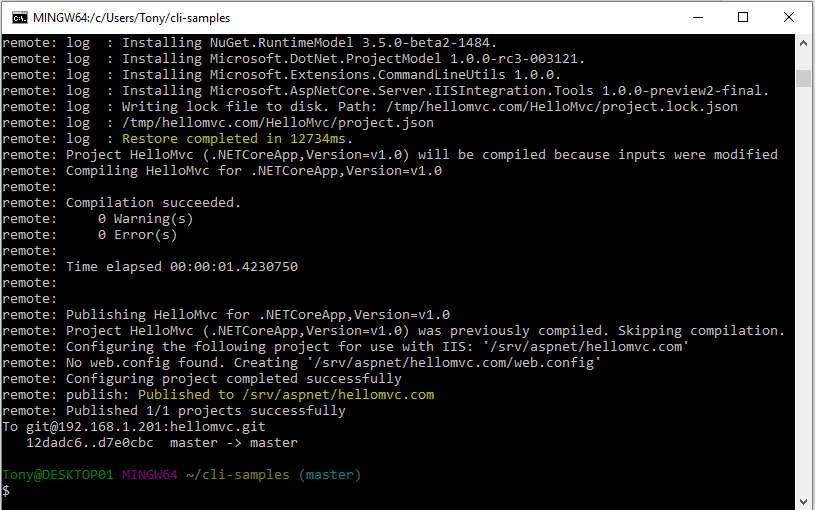 In this post I showed you how to setup Git to push a local ASP.NET Core site to a remote Ubuntu 14.04 server. We also configured a Git hook so that the project would be built and published to a suitable location on the server where it can be run from.

I didn’t explain how to run the published site because I have already discussed this in a previous post. Read it here: How to Run an ASP.NET Core Website in Production on Ubuntu Linux

If you have any questions or you’ve spotted any mistakes please leave them in the comments below.

Subscribe now to receive practical tips on how to become a better software developer.